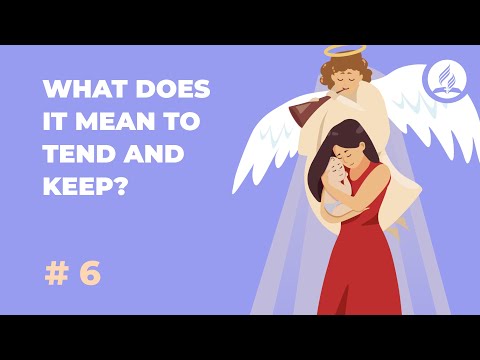 What Does it Mean to Tend and Keep?

Genesis tells us the story of the 6-day creation week, followed by the first Sabbath. God’s relational love is introduced right away as he creates a perfect world, then personally forms the first two human beings to populate this planet.

Seventh-day Adventists hold to this creation account in Genesis and the idea of intelligent, loving design. The attention, foresight, and tender care God displays in this process inspires us to live grateful lives to honor our Creator.

To discover the meaning packed into the creation story, let’s look closely at:

The Bible’s account of God creating the earth is more than just a documentation of the earth’s divine beginnings. It tells us who we are, where we came from, and what amazing things God has planned for humanity.

God has revealed in Scripture the authentic and historical account of His creative activity. He created the universe, and in a recent six-day creation the Lord made “the heavens and the earth, the sea, and all that is in them” and rested on the seventh day. Thus He established the Sabbath as a perpetual memorial of the work He performed and completed during six literal days that together with the Sabbath constituted the same unit of time that we call a week today. The first man and woman were made in the image of God as the crowning work of Creation, given dominion over the world, and charged with responsibility to care for it. When the world was finished it was “very good,” declaring the glory of God. (Gen. 1-2; 5; 11; Exod. 20:8-11; Ps. 19:1–6; 33:6, 9; 104; Isa. 45:12, 18; Acts 17:24; Col. 1:16; Heb. 1:2; 11:3; Rev. 10:6; 14:7.)

The very first words of the Bible tell us who the creator is and what He created.

“In the beginning God created the heavens and the earth” (Genesis 1:1)

This idea is reinforced in the New Testament in Romans 11:36:

The literal six-day creation week comes from Genesis chapters 1 and 2. God hovers over a “formless and empty” earth enveloped in darkness, and begins His work (Genesis 1:2).

On the first day…

God created light by speaking it into existence.

Evening and morning made the first day of creation (Genesis 1:3-5).

On the second day…

God spoke and created the sky and the sea.

He made an “expanse between the waters,” separating the water above the earth (the “firmament”) and water on the earth. The expanse in between He named the “sky.”

Another evening and morning made this the second day. (Genesis 1:6-8)

On the third day…

God spoke and gathered the water together to reveal dry land, naming it “earth” and naming the water “seas.”

God saw it was good and spoke into the dry earth to produce roots to bear plants, flowers, and trees. And on the plants grew fruit.

Another evening and morning made the third day (Genesis 1:9-13).

On the fourth day…

God spoke to create lights in the sky to brighten the earth and to distinguish seasons.

He saw that they were good, and evening and morning were the fourth day (Genesis 1:14-19).

On the fifth day…

God spoke and created living creatures, great and small, to swim and swarm in the waters. He created birds of every kind to fly in the air.

When he saw that it was good, He commanded the creatures to multiply and fill the seas and the skies. The evening and morning made the fifth day (Genesis 1:20-23).

On the sixth day…

God spoke and created beasts, livestock, and every creeping thing to roam the earth.

Then, God did something different.

He spoke everything else into existence up to this point. But then He took from the “dust from the ground” and physically formed the first human being. Then He “breathed the breath of life into his nostrils, and the man became a living being” (Genesis 2:7, CSB).

What’s more, this living being was created in God’s image, according to His “likeness” (Genesis 1:26, CSB).

God saw that everything He made was good, and another evening and morning was the sixth day (Genesis 1:24-31)

On the seventh day…

God saw His creation finished and He rested.

He blessed the seventh day and called it holy, as He rested from His work (Genesis 2:1-3).

Not only did God “rest” on the seventh day, but He set this day aside for rest. He made it holy and blessed it, and commanded His living creation to rest as well.

The fourth commandment (Exodus 20:8-11) instructs mankind to remember the Sabbath day to keep it holy. That remembrance is talking about the culmination of this very week of creation, when God made time to enjoy this world with the human race He created.

Because the heavens and earth were finished, God paused. He asks us to pause with Him each week, as a reminder that He is our Creator, and this world was given to us to live in and help take care of.

We owe our very being to Him, and by spending time appreciating His creation, we honor Him and grow closer to Him.

The Godhead created the universe by speaking it into existence

In all the Godhead’s (Trinity) omnipotence, the universe was created through speech. The Genesis account tells us more still about how God created the universe. It was a collaboration between God the Father, Jesus the Son, and the Holy Spirit.

The Word, mentioned by John, is Jesus Himself. John identifies Jesus here as a primary participant in creation.

The second verse of the entire Bible says the spirit of God hovered above the waters (Genesis 1:2). So it was the Father, the son Jesus, and the Holy Spirit that created the universe together. There was a plan—a relationship, intent, and inclusion.

God also wanted humanity to be part of the creation process, and He made us as creative beings. Adam even helped by naming the animals (Genesis 2:20).

With the same care God used to create Adam and Eve, He created each of us before we were even born (Jeremiah 1:5).

Knowing God created us in this way can help us relate to Him, give glory to Him, and love Him.

The importance of knowing God as our creator

When God created the universe, He did so with care and forethought. The order in which God created earth and all its inhabitants shows his masterful design.

The Genesis Creation Story Supports the Process of Living Things

First, God made sure there was water and sky (atmosphere), then separated it out to reveal dry land. On the land, He created plants of all kinds that supported an oxygen-rich atmosphere.

After this, He created lights in the sky that supported the growth of the plantlife. With dry land, water, plants, and heavenly lights created, God filled the sky with birds. He filled the waters with fish and sea creatures. The land He filled with roaming animals, including human kind.

The entire week of creation, God made spaces and then He filled them according to His divine plan. Each built upon the other until finished. When it was done, He rested.

From the first light all the way through to the animals, God spoke His creation into existence.

Then the Godhead agreed to create humanity.

God said, “let us make man in our image, after our likeness” (Genesis 1:26). He spoke His intent—but this time, the words did not make the man. God Himself gathered dust from the ground and formed man in his likeness. Then God breathed life into the human’s lifeless form.

God came face-to-face with him, breathing into his body to give him life. Then God gave him a name: Adam.

With this kind of order established, Adam and Eve were clearly distinct from the other animals. No other creature on earth was created in God’s image. No others were named by God.

In fact, God allowed Adam to name all the other creatures, letting him be part of the holy work of creation!

God even entrusted the first humans with the stewardship of the earth.

No other creature was poised at creation to have a personal relationship with God, or to hold any form of responsibility toward the rest of the world.

God made human beings special, and He desires a special relationship with us.

What the creation story means for us today

As Christians, and as humans, it is important to understand where we come from.

God’s Word documents the origin of the cosmos and its surrounding heavenly sphere.. This is also the beginning of mankind. It’s the beginning of our relationship with God, with one another, and the planet we inhabit.

Belonging is a fundamental desire in each of us. Knowing we play a part ino the big picture, that we are significant, that we are loved—these are key ingredients to fulfillment. Having a space and a purpose is necessary for our happiness and mental health.

We were planned. We were part of God’s plan, and still are. We have a place, as well as a role within that place.

We have complementary masculine and feminine characteristics because God made us to fit together like the most intricate of puzzle pieces.

We have a home because God created it, making sure it was good and perfect before He put us there.

We have food and oxygen because God planted grains, trees, bushes, and fruit-bearing plants to sustain our health.

We have a job because God gave us dominion over the earth and all living things on it.

You were wanted, planned, cared for, provided for, and designed with a purpose. Through Jesus Christ you have life, and that life started at the very origin of the earth.

In our daily lives today, we can live a life of gratitude toward our Savior and Creator. Even though sin came into this world through our free choice, we can know that our “Redeemer lives, and at the last He will stand upon the earth” (Job 19:25, ESV) that He so carefully created for us.

Ready to start Bible studies and discover Scripture for yourself?

God’s work is beyond fantastic, beyond incredible!

It makes a huge difference to realize our full potential.

Why I’m a Creationist

After completing a degree at Christ’s College, Cambridge, preparing to become a minister, Charles Da…