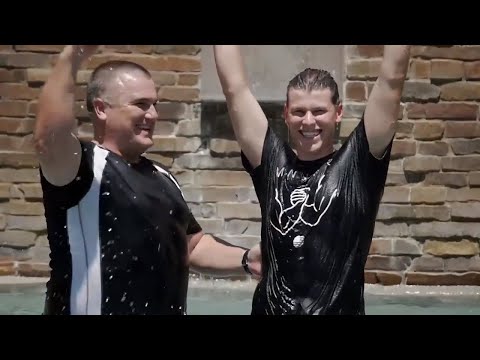 What is the Significance of a Water Baptism?

The biblical practice of baptism demonstrates a person’s commitment to Jesus Christ.  It’s a public ceremony proclaiming that Jesus is their Lord and Savior.

Seventh-day Adventists believe and practice the biblical custom of baptism by immersion, in a similar way that Jesus Christ was baptized by John the Baptist.

This motion of immersion symbolizes Christ’s death and resurrection, which provides the forgiveness of our sins. By going through this symbolic act, we proclaim to accept Christ’s sacrifice and acknowledge Him as our Savior.

Let’s take a deeper look at:

By baptism we confess our faith in the death and resurrection of Jesus Christ, and testify of our death to sin and of our purpose to walk in newness of life. Thus we acknowledge Christ as Lord and Saviour, become His people, and are received as members by His church. Baptism is a symbol of our union with Christ, the forgiveness of our sins, and our reception of the Holy Spirit. It is by immersion in water and is contingent on an affirmation of faith in Jesus and evidence of repentance of sin. It follows instruction in the Holy Scriptures and acceptance of their teachings. (Matt. 28:19, 20; Acts 2:38; 16:30-33; 22:16; Rom. 6:1-6; Gal. 3:27; Col. 2:12, 13.)

Baptism symbolizes the death and resurrection of Christ

Baptism testifies of your conviction to follow Jesus and is integral to the life and faith of the Christian. It’s that conviction that drives you to live out your faith boldly and without trepidation.

When a new believer makes a commitment to Jesus Christ, baptism is an ideal next step. The biblical practice of baptism is an outward demonstration of an inward commitment.

The word baptism comes from the Greek word baptizo which means to “immerse, submerge; to make fully wet.”

In the Adventist church, baptisms involve new believers being fully immersed under water then immediately brought back up.

This motion of submerging oneself in water, then rising back out, symbolizes the death and burial of Jesus Christ. When one comes up out of the water they are symbolically raised to a new life in Christ. It’s an exciting and important part of a new Christian’s life.

“Do you not know that all of us who have been baptized into Christ Jesus were baptized into his death? We were buried therefore with him by baptism into death, in order that, just as Christ was raised from the dead by the glory of the Father, we too might walk in newness of life.” (Romans 6:3-4, ESV).

“Having been buried with him in baptism, in which you were also raised with him through faith in the powerful working of God, who raised him from the dead” (Colossians 2:12, ESV).

When Christians are baptized, we publicly declare our faith and obedience to Jesus. We are openly declaring our new found commitment to following Jesus. We are basically saying, “I know I am a sinner in need of a Savior and I choose to be a follower of Christ today.”

The purpose and importance of baptism

So many of the baptisms in the Bible happened when someone gave their heart to Jesus. Their hearts were converted and they wanted to publicly declare their desire to follow and believe in Him.

In Acts 8 we find a conversion story of one such man who gave his heart to Jesus and wanted to be baptised right then and there!

The angel of the Lord had instructed Philio to go south on the desert road from Jerusalem to Gaza. As Philip traveled along the road he met an Ethiopian eunuch. This man was an important official in charge of all the treasury of the queen of Ethiopians.

This man had gone to Jerusalem to worship and on his way home he was sitting in his chariot reading prophecies about Jesus in the Book of Isaiah.

“Philip opened his mouth, and beginning with this Scripture he told him the good news about Jesus. And as they were going along the road they came to some water, and the eunuch said, “See, here is water! What prevents me from being baptized?” … and they both went down into the water, Philip and the eunuch, and he baptized him.” Acts 8:35-38 ESV

The eunuch was so excited about his new life in Christ he wanted to be baptized right then and there! When we make a vow to Jesus to be His disciple, baptism tells others we are serious about that decision.

You feel compelled to share the Good News of God’s grace with others around you.

Jesus commanded believers to go out into all the world preaching the Good News. He told the disciples to teach people about how they could be saved. And He said new believers were to be baptized!

“Go therefore and make disciples of all nations, baptizing them in the name of the Father and of the Son and of the Holy Spirit” (Matthew 28:19, 20, ESV).

Baptism is an integral part of the great gospel commission. Jesus told His disciples to baptize new believers as they preached the Word of God. And baptism is a key component of the Christian faith.

Where did baptism come from?

In the Bible we find John the Baptist preaching and baptizing believers. Luke 3 tells the story of John’s “preparing the way” for the coming of the Lord.

“The word of God came to John the son of Zechariah in the wilderness. And he went into all the region around the Jordan, proclaiming a baptism of repentance for the forgiveness of sins” (Luke 3:2,3, ESV).

John the Baptist was telling people to get ready because Christ was about to come and start His earthly ministry.

“John answered them all, saying, ‘I baptize you with water, but he who is mightier than I is coming, the strap of whose sandals I am not worthy to untie. He will baptize you with the Holy Spirit and fire’” (Luke 3:16, ESV).

Later in the chapter we see Jesus baptized by John the Baptist. The heavens opened up and God’s presence descended in the form of a dove.

“Now when all the people were baptized, and when Jesus also had been baptized and was praying, the heavens were opened, and the Holy Spirit descended on him in bodily form, like a dove; and a voice came from heaven, “You are my beloved Son; with you I am well pleased” (Luke 3:21, ESV).

John the Baptist boldly proclaimed the Word of God. He called people to confess their sins. He called them to repentance. And he warned them to flee the wrath of God, which was aimed at the pride, greed and selfishness within the religious leadership of the time.

Because of this, John the Baptist was uneasy at the request to baptize Jesus. He didn’t feel worthy of such a task.

But baptism wasn’t something Jesus just commanded new believers to do. He participated in the ceremony as an example for us to follow. But why? He didn’t need to be washed clean.

Jesus was baptised because He was representing the human race, as a sacrifice in our place. And he is also our example so we should be baptised in the same way.

“But Jesus answered him, “Let it be so now, for thus it is fitting for us to fulfill all righteousness.” Then he consented.” Matthew 3:15 ESV

Jesus came out of the water and the voice of God was heard. God the Father said He was pleased with His Son (Matthew 3:17).

“To the praise of the glory of His grace, by which He made us accepted in the Beloved.” Ephesians 1:6 NKJV

What is the role of baptism in the Christian’s life?

Baptism is simply an outward expression of a Christian’s faith. Jesus’ example of baptism demonstrated his dedication to His Father in Heaven. Christians show their dedication to God through the biblical practice of baptism.

Does a Christian need to be baptized to be saved?

No. It’s the blood of Jesus that saves us, not baptism. Salvation is a free gift of God. We are saved by grace through faith. The Bible is very clear about how we are saved. Baptism symbolizes salvation but is not a way to earn salvation.

“For by grace you have been saved through faith. And this is not your own doing; it is the gift of God, not a result of works, so that no one may boast” (Ephesians 2:8-9, ESV).

The thief declared his belief in Christ Jesus as the Son of God. He asked Jesus to remember him. Jesus told the thief he would be in heaven with Him.

The physical act of baptism isn’t what changes a person. It’s the Holy Spirit’s work that makes the difference.

What were the circumstances surrounding baptisms in the Bible?

If we read about the baptisms in the New Testament we find some similarities.

Baptisms in the Bible were joyful events. Each believer who was baptized believed in the good news they had heard—that Jesus was the Son of God and the long awaited Messiah.

They confessed their sins and gave up their own desires to follow Him. And, they desired to be baptized as a result of their repentance.

How do Adventist’s practice baptism today?

If you want to be baptized in the Adventist church, your pastor may invite you to a baptismal class. These classes are designed to teach people the basics of biblical knowledge. You’ll also learn about the doctrines of the Seventh-day Adventist Church.

In the Adventist church, Baptism is performed by fully immersing a person under water.

There are other Christian denominations that use other methods of baptism such as “sprinkling” or “pouring.”

Adventists perform the ordinance of baptism because of its biblical significance. Jesus was fully immersed in water and we follow His example. When you’re baptized in the Adventist church, it is a declaration that you are dying to your “old self.”

When you “die to your old self” you are essentially choosing to walk in faith, ready to follow Jesus and do His will. Our slavery to sin is dying as we claim Christ’s resurrection to a new life with Him as our guide.

Baptism is also used in church membership categories, but this is not an issue of salvation. It’s just an administrative method of keeping up with a large family of believers.

All in all, Jesus is the reason for all beliefs in the Adventist church, including baptism by immersion. It is an important step in the life of a believer and reason to celebrate, because they are declaring their intent to follow Jesus—and only through Him can we find freedom, healing, and hope.

Ready to start Bible studies and discover Scripture for yourself?

The Christian Rite of Passage

It’s much more than taking a bath.

And for me, it’s deeply personal.

It happens every year on the morning of my birthday. Mom calls and relives the day that I was born.…

Baptism by the Book