There are sound reasons for the enduring nature of Christianity.

The thing that ultimately sets it apart from every other religion is the fact that the God of Christians is not just a metaphysical concept. Most people find it difficult to understand where we human beings came from, where we are going and where meaning can be found in life.

However, through Jesus Christ, God has shown us what He is like, and He has answered those questions. While retaining His divinity, Jesus became in every respectfully human and lived with us for some thirty years. The birth, life, death, resurrection and exaltation of Jesus give us all we need to know about who God is and what His character is like, for, as Jesus said, “‘Anyone who has seen me has seen the Father’” (John 14:9).

In 30 short years, from A.D. 30 to 60, Christianity spread throughout the Roman Empire. Since then it has transformed the lives, beliefs and moral structure of the billions of people who’ve encountered Jesus and placed their faith in Him.

But to a non-believing observer, nothing seems to have changed in the great problems be setting life on earth—sickness, war, death and all the malevolent manifestations of sin that existed before Jesus came to earth—continue to plague us. Humanity’s inhumanity to man continues to escalate at a frightening pace, moving our world into an increasingly fearful future.

Does Christianity solve anything?

Did Jesus’ death and resurrection make any lasting difference to these pressing issues? And, if Jesus is who He claimed to be, is He ever going to stand up and deal decisively with the Hitlers, Stalins, Pol Pots and Bin Ladens of this world?

John the Revelator saw those “who had been slain because of the word of God and the testimony they had maintained. They called out in a loud voice, “How long, Sovereign Lord, holy and true, until you judge the inhabitants of the earth and avenge our blood?” (Revelation 6:9, 10).

The prophet Daniel heard a similar agonizing question being asked: “How long will it take for the vision to be fulfilled—the vision concerning … the rebellion that causes desolation?'” (Daniel 8:13).

These questions are answered decisively in the closing chapters of the book of Revelation, for they describe Jesus stepping into history a second time. However, when he comes again, Jesus won’t be the gentle person described in the Gospels. Revelation 19 shows Him riding out of heaven on a white horse with an army of angels behind Him, also riding on white horses. Their purpose is to destroy all those who have rebelled against Him and sought to destroy His people. They have knowingly given their whole lives over to the control of Satan and been driven by Satan’s hatred of Christ and His followers. These people are all slain by Jesus’ presence.

On the other hand, all those who have been faithful followers of Jesus will go with Him to heaven. Thus, with the wicked destroyed and the righteous taken from earth, our planet will be desolate.

This sets the scene for chapter 20. We are told that for the next 1,000 years (sometimes referred to as the millennium) the devil and his angels will be confined to the “abyss,” a place where demonic beings are isolated by Jesus (Luke 8:31). The word “abyss” in our English Bibles is a translation of the Greek word “abussos.” In the Greek version of the Old Testament, this word appears in Genesis 1:2, which says that prior to creation, the world was “formless and empty, and darkness was over the surface old the deep [abussos].”

This suggests that prior to Creation week, our planet was a wasteland, making it an apt portrayal of our devastated planet at the end of the world.

So what will the righteous do during this same period of time? The Bible doesn’t say a lot about this, but it does show God’s people engaged in a work of judgment. Revelation 20:4 says that they will be given “authority to judge.” This judgment was foreshadowed by Paul. Writing to the Christians in Corinth, He said “Do you not know that the saints will judge the world? … Do you not know that we will judge angels?” (1 Corinthians 6:2, 3).

It is evident that this judgment involves access to the way God has dealt with those who rejected His love and the consequences of their rebellious choices. In so doing, God has been willing to put Himself under judgment so that every last bit of doubt about His righteousness will be removed. Not only is justice carried out, it is also openly observed.

Two things will happen at the end of the millennium. First, God’s city, the New Jerusalem, will descend from heaven and settle on our planet (Revelation 21:1). Second, those who rejected Jesus will be brought to life again (Revelation 20:5). However, the purpose of this resurrection is not to give them a second chance for salvation, since they will come out of the grave just as they went into it, with hearts full of hatred for God and His people. God has another deeper purpose for their resurrection. Satan is described as once more deceiving them into believing they can still overcome God. Satan marshals them for one last attempt at conquest, and they march across the broken earth to a final battle against God. They will attempt to storm the New Jerusalem.

Every person who ever lived in all of world history will be present at this time. Those who accepted Jesus as Savior will be with Him inside the city, and all those who rejected Him will be with Satan outside the city. And now the climactic scene of all history occurs. Jesus is pictured elevated on His throne of judgment. The untiring work of God’s grace in the lives of those outside the city and the ceaseless opportunities given to them to respond to the salvation offered them will be replayed from the “books” that contain those records.

God has once again put Himself on trial in order that Satan’s accusations against Him might be refuted before even those who rejected Him. They will see that God is righteous in doing what He is about to do. In that great moment, every human being will acknowledge the righteousness of God—even the wicked (Romans 14:11).

A consuming fire will then descend on the earth and utterly destroy all those outside the city of God. From the ashes of the old earth God will create a new heaven and a new earth (see 2 Peter 3:13; Revelation 21:1) and sin will be removed for all time from the universe.

Should the same questions about God’s goodness ever arise again, the story of His eternal love and grace as expressed in the birth, life, death, resurrection and exaltation of His one and only Son, Jesus, will be retold once more. John suggests that the nail prints in Jesus’ hands will remain in His glorified body as an eternal witness to the cost of our salvation (John 20:27), and the loving character of God will stand forever vindicated at last.

This article originally appeared in Signs of the Times magazine, June 2010.

When Sin Will Be No More
The Millennium and the End of Sin April 6, 2015 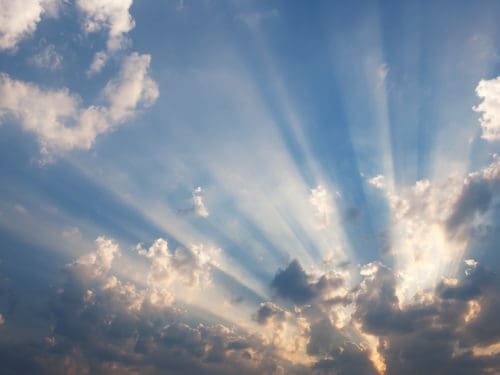