To this day in the American South, there are groups of Christians who take literally the passage in Mark 16:17, 18 where Jesus said, “These signs will accompany those who believe . . . they will pick up snakes with their hands; and when they drink deadly poison, it will not hurt them at all.” As part of their services, these people pick up poisonous snakes, since they think that the ability to pick up snakes without harming themselves demonstrates that they are true believers. When Jesus said these words, did He intend that we should bring snakes into our church services? You may have seen this bumper sticker: “God said it; I believe it, and that settles it.” After all, if God knows all and has shared the truth with us, and we believe it, so shouldn’t that settle all questions? Well, it’s not quite that simple, as it turns out.

Many of the same people who sport this bumper sticker like to refer to the Bible as “God’s instruction manual for humanity.” There’s a sense in which that statement is true, because Christians do derive principles for living good lives from the Bible. However, we’re also fortunate that it’s not actually an instruction manual. Why? First of all, because instruction manuals rarely make good reading material. They’re more likely to put us to sleep in the daytime than keep us turning pages at night.

Second, considering that the most recently written books in the Bible are nearly 2,000 years old, we can’t expect them to have much to say about such recent issues as the Internet, tobacco, or the moral issues involved with in vitro fertilization and organ transplants. Satellite TV, cell phones, and financial instruments are just a few of the things that simply didn’t exist all those years ago.

If we want guidance for today, we cannot read the Bible like a literal instruction manual in a “place tab A in slot B” manner. It requires some effort on our part. Rather than being like an instruction manual, the Bible contains many kinds of literature, including riveting narratives, lyrical poetry and deeply romantic prose. Even where passages of instruction do exist, they may contain figurative language and symbolism. And, as we have seen, they address the common ethical and moral issues of the Bible writers’ day, most of which do concern us, but so do other issues that the Bible writers never knew about. When it comes to some of the instructive passages, it isn’t always obvious how literally they should be understood.

That clearly is instruction, but we have to ask ourselves, “Did Jesus mean it to be taken literally?” Are there any of us who are not tempted through our eyes, by the sight of our neighbor’s new car, or his pretty wife? Were the disciples immune to such temptations? If so, why do we have no record of them blinding themselves? Origen, one of the early church fathers, took this passage literally, but instead of his eyes, he emasculated himself. Do we really believe that it’s God’s will that His followers maim themselves in pursuit of righteousness? Or was Jesus speaking in what we call “hyperbole,” which means making an extreme statement that should not be taken to its most literal extreme?

Perhaps no teaching of Jesus is better known, or more misunderstood, than the one where He said, “Do not resist an evil person. If anyone strikes you on the right cheek, turn to him the other also” (Matthew 5:39). Did Jesus mean that under no circumstances are we to resist an evil person? Did He mean that a woman living in an abusive relationship should just “turn the other cheek” and allow herself to be battered repeatedly rather than resist or move out? What about her children? Did Jesus mean that the police should not try to stop a serial killer? On another level, one prominent politician suggested that taking this text seriously might mean dismantling the U.S. Department of Defense.

Gouging out our eyes and handling poisonous snakes to affirm our faith, none of these appeals to our common sense. Neither does letting violence and criminal behavior or wife-battering and child abuse go unchecked. But please note that when we say “makes sense,” we are appealing to reason. And that brings us to another problem.

Some today—both Christians and non-Christians—place faith and reason in opposition to one another. But this is not the biblical view. Isaiah 1:18 declares, “Come now, and let us reason together,’ says the Lord.” Unless we reason as we read, we will fail to understand what we’re reading. A passage from Nehemiah shows that the need to engage the Word with our intellect is nothing new.

After 70 years of captivity in Babylon, many of the brave souls who returned to rebuild Jerusalem had not heard or read the Scriptures. So a group of priests “read from the Book of the Law of God, making it clear and giving the meaning so that the people could understand what was being read” (Nehemiah 8:8; emphasis added). Paul exhorted Timothy to “be diligent, . . . accurately handling the word of truth” (2 Timothy 2:15,NASB). Note that “accurately handling the word of truth” requires diligence, and diligence includes careful reasoning.

A key consideration is the context in which a particular verse or passage occurs. Context is so important that we cannot even pronounce certain words with certainty unless we know the context. For example, should the word read rhyme with “seed” or with “bed”? Only by considering the context can we be sure of its meaning.

What is the point of the passage? Asking this question can save us from a lot of silly mistakes. When Joshua asked for the sun to stand still (Joshua 10:12, 13), he simply wanted more so he could pursue his enemies. He did not ask for, nor did God give him, an explanation of celestial mechanics. For us to draw conclusions about the movements of the sun and our earth based on that text would be a misuse.

Our “turn the other cheek” example occurs in a list of things that Jesus contrasted with “an eye for an eye.” To understand what He meant by “turning the other cheek” requires that we know how it compares with the other items on the list: giving your coat as well as your cloak and going the extra mile.

In fact, if we study the cultural and historical context of “turn the other cheek,” we discover that all three behaviors were considered insults that the occupying Roman soldiers perpetrated against the Jews.

Some critics of the Bible love to point out what they see as “contradictions.” For example, although Jesus clearly said, “Do not resist an evil person,” several Roman centurions appear in the New Testament, and not once did Jesus or any of the disciples tell them to change their employment. The Roman army was brutal, yet Paul declared they were God s servants in restraining and punishing evil (Romans 13:1-4).

It appears that Jesus did not intend for His followers to ignore rapacious and lethal force; rather, He meant that we should not retaliate against insults or attempt to get even. Protecting ourselves and other innocent people from injury and death is not at issue. Indulging our lust to make others hurt as much as we do or to salvage injured pride is.

Clearly, God wants us to use our reason in understanding His Word. But we can reason ourselves into mistakes. So, as a safeguard, we should always pray for the Holy Spirit to guide our reason as we study, to help us see God’s perspective. We should read large passages and broad themes as well as the small details. This will give us a broader textual perspective.

It’s also wise to share our interpretations with others in order to get their point of view. Not every thing that makes sense to me makes sense to others. And Peter reminds us “no prophecy of Scripture is a matter of one’s own interpretation” (2 Peter 1:20, NASB). None of us has a monopoly on reason. We also know that there is safety in seeking counsel from more than one person (Proverbs 11:14). Before we do something like picking up a poisonous snake to validate our faith or injuring ourselves physically, we should consider whether others find our reasoning compelling.

Thank God that the Bible is not a dull, stuffy instruction manual but rather a rich combination of various modes of literary expression—a divinely inspired and fully human book that can engage every part of us, including our minds. 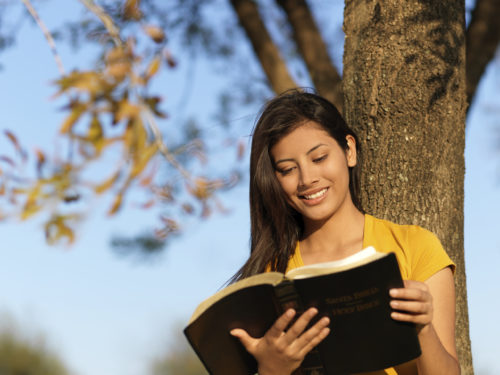