Jesus loved to tell stories. And people loved to listen to them. With his stories, Jesus encouraged people to think, to question and to deliberate—to enjoy the journey of their own personal spiritual discovery (Matthew 13:11-15).

In the Bible, the gospel writers, Matthew, Mark and Luke recorded one particular parable that Jesus told. Jesus may have explained other parables to his disciples ( Mark 4:11), but this is the only one that is recorded by all three writers with such detail. This suggests that they considered the truths of this parable to be so important that they didn’t want them to be misunderstood by any of their readers. The story is about a farmer.

“‘Listen,'” Jesus said, while looking across the landscape. “‘A farmer went out to sow his seed …'” (Matthew 13:3-23). In those days, the grain seed was planted by a farmer who would carry it in a bag over his shoulder, holding it with one hand and, with the other hand, cup the seed and disperse it as if casting a net. Jesus referred to the “seed” and the “message about the kingdom” in other words, the “good news” or gospel (verse 19). In this story the seed fell upon four different types of ground: a footpath, rocky soil among thorns and weeds, and on fertile soil. Anyone who has visited Israel would immediately recognize such landscapes today. The four different types of ground reflected four different types of responses people might have to the “good news” about the kingdom of God.

“‘Some [seed] fell along the path, and the birds came and ate it up’” (verse 4). This refers to those who have read the Bible, and though they Considered it either a “good read” of historical interest or a piece of great literature, they didn’t understand its true worth, and they never allowed the words and the Spirit of God to touch their hearts. For them the Bible was nothing more than an academic exercise. Or maybe they didn’t really understand the text and never took time to reflect, consider or ask.

And so all too quickly the words that could have brought life to their soul (see John 4) were allowed to fall into the recesses of their minds. The seed that had such potential for growth was planted and stolen in a moment of time. “‘When anyone hears the message about the kingdom and does not understand it, the evil one comes and snatches away what was sown in his heart. This is the seed sown along the path'” (verse 19), He concludes.

“‘Some [seeds] fell on rocky places, where it did not have much soil. It sprang up quickly, because the soil was shallow. But when the sun came up, the plants were scorched, and they withered because they had no root'” (verses 5, 6).

There are some people who hear the good news and for a time live a life of spiritual ecstasy, much like what is referred to as the “honeymoon period” of any relationship. There are birds singing everywhere, the sky is bluer, the grass greener, and everything is wonderful! God is given praise for everything. He is continually acknowledged, worshiped, and given an abundance of glory and honor. But eventually bad stuff happens: a fellow devotee makes a negative comment about them, they’re asked to make a stand for what they allegedly believe. A loved one is badly injured in an auto accident, they lose their job, or their partner chooses to end their relationship.

Jesus is suggesting that when this happens to these people, they throw in the towel—they reject God, the One they were so quick to praise, and grow no more. “‘The one who received the seed that fell on rocky places is the man who hears the word and at once receives it with joy. But since he has no root, he lasts only a short time. When trouble or persecution comes because of the word, he quickly falls away’” (verses 20, 21).

“’Other seed fell among thorns, which grew up and choked the plants'” ( verse 7). The people represented here are those who listen, accept, and begin to grow in a relationship with God. However, they soon become distracted. It might be by something good like a job promotion or a new house, or it might be bad like trying to survive a financial crisis. Or perhaps the water heater breaks down and floods the basement. Insurance claims have to be completed. Quotes for repairs have to be obtained and before they know it, any thoughts toward God or a spiritual life have all but gone.

With these and other distractions, the growth in a relationship with Jesus wanes and slowly dies. No fruit will come from these plants. “‘The one who received the seed that fell among the thorns is the man who hears the word, but the worries of this life and the deceitfulness of wealth choke it, making it unfruitful’” (verse 22).

“‘Still other seed fell on good soil, where it produced a crop—a hundred, sixty or thirty times what was sown'” (verse 8). The people of the “fertile soil” are those who are listening, reading, praying, sharing, seeking, digging deeper and wanting more. While still participating in the world around them, they realize that there is more to life. They realize that a meaningful relationship with God satisfies the soul more than anyone or anything else; that values such as mercy, justice, and love are to be given priority, and that by hearing and doing, much fruit is born. “‘But the one who received the seed that fell on good soil is the man who hears the word and understands it. He produces a crop, yielding a hundred, sixty or thirty times what was sown'” (verse 23).

The evidence of a growing relationship with God is the fruit. My father once said to me, “You don’t have to tie the fruit on. It is simply harvested off.” In other words, what a person says, does, and is, isn’t something that has to be forced or coerced. Going about doing good is not something driven by an external force or a desire to earn recognition or salvation. Rather, it is an intrinsic force that is driven by the Spirit of God, which has been planted in the heart and allowed and encouraged to grow, to mature, and to bear fruit. And what is the harvest? What is the fruit? Paul described it well in Galatians 5:22, 23 where he says, “The fruit of the Spirit is love, joy, peace, patience, kindness, goodness, faithfulness, gentleness and self-control.”

This article originally appeared in Signs of the Times magazine, March, 2010. 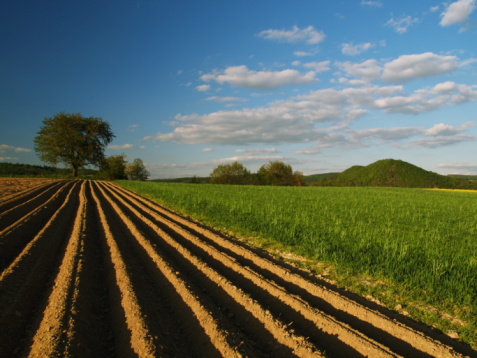