It was—there’s no nicer way to put it—an ugly day.

Temperatures below zero, a gusty north wind pounding my windshield. I was driving from Lincoln, Nebraska, to Jamestown, North Dakota, following a black van. The bitter wind tugged on the car, and the van ahead kicked up little blizzards as it hit snow drifts that spanned the road. A snow-bleached sun made reluctant appearances through the clouds. I watched the blasted landscape pass: deep banks of dirty snow covering fields of dead vegetation, the occasional skeleton of a tree. Everything looked lifeless. It was hard to believe this world could ever be vibrant and alive.

Yet as bad as the weather was outside, the climate in my heart was even worse. For in the van ahead was a casket, and in the casket, the body of my mother who had died a few days before at the age of 57. I was on my way to lay her to rest in the same country churchyard where my father had been buried just a year earlier.

Why did my parents, with so much to live for, die so young? Both got cancer. Both lost the battle. They didn’t live to see their grandchildren grow up. All that they’d looked forward to in retirement was gone. And though their suffering had ended, they’d left a huge empty hole in the lives of the rest of us.

There are many ways we Christians try to understand the resurrection of Jesus Christ. We examine its place in the plan of salvation as a fulfillment of Old Testament prophecies and rites. Religious philosophers expound about it metaphysically. Great artists recreate it in pigment or stone. Actors depict in drama the panoply of characters and events. Each Easter, in hymn and liturgy, Christians around the world remind one another what happened on a spring morning 2,000 years ago. Yet there is only one way to really understand Jesus’ resurrection as deeply and profoundly as it was meant to be understood: by standing at a grave, looking down at the body of someone you loved, one whom you will never again see alive on this earth. For Jesus’ resurrection is not a theological idea or a historical event but a personal promise that God will heal the deepest sadness that human beings can feel.

God warned Adam and Eve that disobedience would lead to death (Genesis 2:17). The last time God ever spoke face-to-face with humankind, it was to pronounce the fatal words, “By the sweat of your brow you will eat your food until you return to the ground” (Genesis 3:19). “Return to the ground”? I wonder if Adam and Eve, having lived their lives up until then in such a perfect earth, could possibly have understood what God meant.

They soon found out. From that moment they began to realize that skin can get wrinkled, hair gray, sight dim, muscles sore, stomachs achy. Accidents began to happen. Once-friendly animals turned vicious. People became violent toward one another. And when at last Adam and Eve saw their own son Abel stop moving and breathing and thinking; when they saw his cold, motionless body decay and stink so that they could do nothing but bury it under the soil; then it became clear what a horrible thing they’d brought on themselves—and the world.

Ever since then, we’ve been longing for a remedy. The prophets spoke hopefully of not just ending death, but reversing it. Said Job, “I know that my Redeemer lives, and He shall stand at last on the earth; and after my skin is destroyed, this I know, that in my flesh I shall see God. . . . How my heart yearns within me!” (Job 19:25—27, NKJV).* Ezekiel wrote, “Thus says the Lord God: ‘Behold, O My people, I will open your graves, and cause you to come up from your graves,.. . and you shall live'” (Ezekiel 37:12-14,NKJV). Daniel saw in vision a time when “multitudes who sleep in the dust of the earth will awake” (Daniel 12:2).

Yet all commentators agree that the Old Testament picture of death wasn’t an optimistic one. “It is not the dead who praise the Lord,” David wrote. Instead, they “go down to the place of silence” (Psalm 115:17). “As for man, his days are like grass; as a flower of the field, so he flourishes. For the wind passes over it, and it is gone, and its place remembers it no more” (Psalm 103:15, 16, NKJV).

So while all hoped for a future resurrection, just exactly how God would put death out of business was unclear. And it became clear only with the appearance of Jesus Christ.

Anyone reading the Christmas story knows that when Jesus arrived, few people recognized Him as the Savior of the world. Even those who knew Him best didn’t necessarily understand the purpose of His life. Later, when they saw that God had given Him the ability to perform miracles and that He was a convincing teacher and powerful speaker, their first instinct was to elevate Him to the post of general or monarch.

But Jesus refused to be drafted into political leadership. He deliberately chose an impoverished, itinerant life. He preached, not success and fame, but sacrifice. “Whoever wants to become great among you must be your servant” (Mark 10:43). “Anyone who loves his son or daughter more than me is not worthy of me” (Matthew 10:37). To one man, he said, “Sell everything you have and give to the poor. . . . Then come, follow me.” To follow Him meant giving up everything; for Jesus, whose powers would have made it possible for Him to have had anything He desired, was homeless. “Foxes have holes and birds of the air have nests, but the Son of Man has no place to lay his head” (Matthew 8:20).

Several times Jesus hinted of an even greater sacrifice: “The Son of Man did not come to be served, but to serve, and to give his life as a ransom for many” (Matthew 20:28). What, the disciples may have wondered, does He mean? Finally, He told them bluntly that He “must suffer many things, and be rejected by the elders and chief priests and scribes, and be killed” (Mark 8:31, NKJV).

The disciples were frightened. They stayed near Jesus, but the days that followed tested their commitment. All that Jesus had described happened. They saw Him sentenced to execution and nailed to a cross. They watched Him die. He was wrapped for burial and laid in a tomb.

No one could have had any doubt that He was dead. Several days later—afraid that what had been done to Jesus would be done to them—they were still cowering, terrified, in a dark room.

In the trauma of that tragic weekend they’d forgotten the last thing Jesus had told them—that “after three days [I will] rise again.” Those words didn’t come to mind again until some of Jesus’ female followers, braver than the men, went to His tomb on Sunday morning and found it empty (Luke 24:1, 2). Later that afternoon, two of Jesus’ disciples claimed that He had walked and talked with them (verses 13-35). Then, to their amazement, Jesus Himself appeared among them (verse 36). Now Jesus’ friends knew for certain that, through God’s power, He had overcome death.

Jesus’ resurrection that Sunday morning is proof that God won’t let death win. The thing that destroys every human life—the one thing over which we are completely helpless, the most feared and dreaded event in life—Jesus has overcome! Though others, like Jesus’ friend Lazarus, were made alive only to die again, in Jesus, death was defeated forever. Because He was the Son of God, His resurrection embodied the promise that everyone who accepts Him can live forever. “For as in Adam all die, even so in Christ all shall be made alive” (1 Corinthians 15:22).

If it happened once, it can happen again. If even one time God brought a man who was completely dead back to full, robust and perfect life, then He can do it again. If He did that for Jesus, He can do it for you and for me, for our children, parents and grandparents, not to mention millions upon millions whose names the world has forgotten.

And He will. Jesus Christ, said Paul, was the harbinger of resurrection for the rest of us, “Each one in his own order: Christ the firstfruits, afterward those who are Christ’s at His coming” (1 Corinthians 15:23, NKJV). That’s why I’m confident that a day is coming when the graves will burst open and I’ll see my parents again. Not as I saw them last—in a hospital bed, exhausted from pain, their hair fallen out, eyes dull, hooked up to tubes and machines—but in healthy, vibrant life. I’ll take their hands and, joined by relatives and friends and a numberless crowd of others, we’ll walk into that holy city, never to part again. And so will you and the loved ones you’ve had to bid farewell to in death.

All it takes is accepting Jesus as your Savior. If you haven’t already done so, I invite you to say Yes to Him today.

This article originally appeared in Signs of the Times magazine, April 2012. 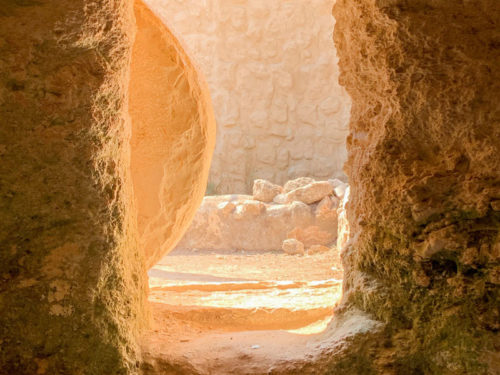