My calculator and I were staring at each other. 1

It was my junior year in college, and I had finally received my money from summer camp and a mission project. Since I was preparing for the ministry, I thought I might as well keep the tithe portion (Is there anything new under the sun?). Same bucks, same bucket. Although I didn’t have Malachi 3:10 in mind at the time, the still small voice convinced me to tear a check out of my checkbook and fill out one of those little tithe envelopes.

One week later I found a letter from Southwestern Adventist University in my mail. Faster than I had written the check, I tore into the envelope.

The letter started out, “Congratulations, Ingo. We are pleased to inform you …”

It went on to say I received a scholarship, which turned out to be 10 times the size of my tithe check!

The incident prompted me to take a closer look at tithing. A church once ran the following sign: “We give God a lot of credit, but we hesitate to give Him cash!”

From the start, Adam received gifts from God. God’s presence meant God’s presents. First, God gave him food (Gen. 1:29). Then He added a woman to an already breathtaking environment (Gen. 2:22). After Adam and Eve messed up, God did not stop giving. He always stood ready to provide and bless.

But if God’s presence implies God’s presents, our presents, conversely, invite His presence. Cain quickly figured that out when the wrong gift meant a loss of God’s presence. With a sense of tragic finality, Genesis 4:16 reads: “Then Cain went out from the presence of the Lord” (NKJV). Someone said that giving is living and living is giving.

Because I come from a Lutheran background, 10 percent to me seemed like a huge chunk2,   and 10 percent plus offerings turned out to be one of the more significant numbers on my tax return on April 15!3  Is this the church in pursuit of the purse?

The number 10 appears to be the lowest negotiable denominator for God.4 “Abraham stopped bargaining with God over sinners in Sodom when he reached the number 10. God came down on Sinai and gave Ten Commandments. And remember Daniel’s 10 days of testing?

Graphically, 10 percent doesn’t look all that bad. You give God a piece of His pie, and He just might share His dinner. If you are not currently tithing your income, take a look at the complete picture of Malachi 3. We all have our bills, wills, and ills. But lest we forget, tithing is more than just cash out of our pockets. The issue of tithing is packed into the awesome dynamics of God’s presence in our lives.

Malachi 3 resembles a tasty sandwich with a juicy chunk of theology tucked in the middle to chew on. Graphically, we may represent it as follows:

“My 5-year-old son was proud of the fact he had graduated from bow ties to a necktie just like Dad’s. But one Sunday morning, with his hand clutching the tie, he said in a panicked whisper, ‘Dad, why did the pastor say they’re going to collect the ties and offering?’”5

Tithing presents not just a question of bills and bucks. Tithing directly touches on the bigger picture of the presence of God in our lives and in the lives of others.

Have we given up on giving up? According to Larry Burkett, more than 37 percent of adults who attend church at least once a month give about 2.5 percent of their income to God’s work.6.  Malachi 3 scripturally transforms that truth into a fascinating venture of faith; for in Malachi, what goes up comes down—with a bonus! The acronym is apropos: T-I-T-H-E: Treasure Invested Toward Heaven Expands!

Richard Braunstein said: “It is possible to give without loving, but it is impossible to love without giving.”

Indeed, there are “weightier matters of the law” (Matt. 23:23). But in Jesus’ own words, “these you ought to have done, without leaving the others undone.” And that “other” refers to tithing. Yes, I have stopped “paying my tithe.” I have started giving it up.8

Born in Germany, lngo Sorke was copastoring the Highland Hills Seventh-day Adventist Church in San Antonio, Texas, when he wrote this article. 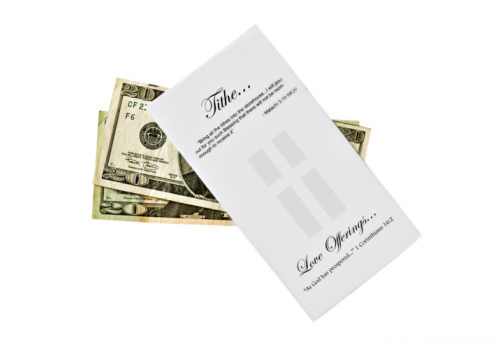