Discovering the Meaning, Purpose and Context Behind Even the Strangest Prophecies in the Bible

Perhaps you’re reading through the historical books of the Old Testament, keeping up with Elijah, Samuel and David. Then you get to the book of Isaiah and find passages about branches,1 vineyards,2 and a cup3 or two of wrath.

Moving on to Jeremiah, you read of a vision about a basket of figs.4 He’s also told to break jars in front of people.5

Then it gets even weirder! In Ezekiel, you read about four-faced, four-winged “men”,6 and the Lord telling him to lay on his side for 390 days.7

Then prepare yourself for the end-time prophecies in Daniel and Revelation!

Want to unlock the mysteries of Daniel and Revelation?

There are a variety of important reasons behind the Bible’s heavy use of symbolism. But when you read entire books of the Bible that are mostly fantastical visions with oddly specific details, what do you do with that?

It can be overwhelming to read through these elaborate prophecies at first. In fact, even long-time students of the Bible have to take it slow through these passages, so don’t be discouraged if your brow is still furrowed even after reading them another couple times. 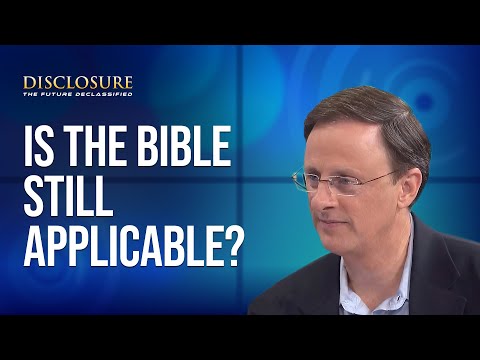 How Do We Know the Bible is Still Applicable?

Instead, take this as a cue:

It’s time for note-taking and a little extra research.

Biblical prophecy often involved important themes and illustrations meant to educate and inspire the nation of Israel—the Jewish people—and sometimes neighboring nations. Even today, many complex ideas are best understood symbolically or metaphorically and are meant to be studied further.

To help you in your study, let’s look at what prophecy actually means and what its purposes are. We’ll look at:

What is a prophecy, really?

When you come across the term in sci-fi and fantasy, “prophecies” almost exclusively refer to foretellings of future events.

The message itself originates from a god-like entity, and it’s talked about as if it’s unchangeable and requiring fulfillment. These messages usually rely heavily on the themes of fate and destiny.

The biblical definition of prophecy is simpler:

It’s a message from God, communicated to a human prophet, who then shares it with the intended audience.

That’s it. The definition stops there. However, there are many different types of prophecies—probably more than you might think.

What does it really mean to be a prophet of God?

You may be surprised!

What are the reasons for prophecies in the Bible?

Human beings—even God’s chosen people in the Bible—aren’t perfect. Humans tend toward selfishness or tunnel vision, and some situations call for additional insight or a good old-fashioned wake-up call.

Looking at the many, many prophecies throughout history as described in Scripture, here are the primary reasons for these messages from God, through humans, to humans.

To warn of potential consequences (and hopefully inspire change)

There are several prophecies of this type throughout the Bible. Some can be looked at as “predictive,” as they explain the consequences in store unless there’s a change in behavior.

However, in these cases, keep in mind that God didn’t actually want these to come to pass! The whole point is to bring attention to a problem, explain its consequences and repercussions, and leave the prophecy recipient(s) with a more informed choice on how to proceed with their lives.

God actually explains this to His prophet Jeremiah:

One example of this is in 1 Samuel 2-3. The High Priest of the time, Eli, had already heard a message from God about what would happen if his wayward sons’ behavior wasn’t appropriately addressed. If he continued to let them regularly commit adultery and manipulate the ceremonial sacrificial system in their favor, their lives and his lineage would be “cut short.”

But as time passed, their behavior persisted, and Eli did little to stop it.

So God used a new prophet—the young boy Samuel—who was already close to Eli, to deliver a message. It was solely to remind Eli what he already knew would happen if he “did not restrain” his sons from desecrating the community’s place of worship.

Since nothing had changed since the first warning, the consequences revealed to him earlier came to pass. His sons died in battle, and he died too, shortly after hearing of their deaths.

Sometimes we can know information, but never really take it to heart. God knows that, and if need be, He can strategically send a messenger to call attention to what’s been forgotten or pushed away.

In other cases, however, this prophetic method succeeded!

In the book of Jonah, God told him to prophesy to the large city of Nineveh. Jonah was to bring them word that their “wickedness” was so great that God would allow their city to be overthrown in 40 days—unless they repented and changed their ways. “The people of Nineveh believed God. They proclaimed a fast and dressed in sackcloth [symbol of mourning]—from the greatest of them to the least. …God saw their actions—that they had turned from their evil ways—so God relented from the disaster He had threatened them with. And He did not do it.” (Jonah 3:5, 10, CSB)

Want to learn how God uses Bible prophecy to bring freedom, healing and hope to us? Check out our free online Bible studies.

Sometimes God had to send a human messenger to remind His people what it meant to live a godly life. Most knew the commandments of God, but it was easy to become blind to issues close to home.

All throughout the Old Testament, particularly in the books of Jeremiah and Lamentations, God’s chosen nation kept ping-ponging back and forth. They’d follow God with fervor for one generation, then fall away the next. Some kings followed God’s plan; some chose to rule the nation according to their own desires.

To keep this fickle group of people in check, God sent numerous prophets to get their attention. The people opted for temporary satisfaction of their desires and temptations instead of following God’s plan. And because of those decisions, they often needed a stern reminder that their hardships were a consequence of choosing their own way over God’s.

The book of Hosea tells the story of the Old Testament prophet Hosea. God called him to proclaim a message to the Jews in Israel and Judah. It wasn’t a message of words, preached from a platform in front of a listening crowd—instead it was a message lived out in a symbolic example.

Since these nations went back and forth on their commitment to God, He commanded Hosea to marry and start a family with an “unfaithful woman”—“for like an adulterous wife this land is guilty of unfaithfulness to the Lord.”

Sure enough, Hosea’s wife, Gomer, would occasionally run off with other men as they tempted her with gifts, wealth, and flattery. But God instructed Hosea to welcome her back with love every time, just as God accepted His chosen people back every time they repented.

To help us understand the future

Notice it’s not, “to tell us the future.”

It’s to prepare us for the future!

That does, however, include some details about what to look for as time goes on.

Many of the most famous Bible prophecies, such as those in Daniel and Revelation, predict the progression of power from one nation to another. They also include some details about how that progression affects the ways people live.

These prophecies are typically the ones loaded with figurative language.

Because these prophets had to think of the most effective way to describe future events or new, complex concepts that would be unfamiliar to the readers. For example,

“Then I saw a second beast coming out of the earth. It had two horns like a lamb, but it spoke like a dragon.” (Revelation 13:11, NIV)

Reading this, you might be thinking, “Beasts? Horns? Dragon?”

Remembering what you learned about symbolism, we know this beast represents a mighty person or nation. It has an appearance similar to a sheep, which symbolizes meekness and loyalty, but ultimately its evil will be revealed as it opens its mouth to speak “like a dragon.”

And even complex, symbolic messages like these can help us in our spiritual growth. Rather than being told exactly which king was going to do what when, this figurative imagery paints a larger picture. Rather than names, we get an idea of the temperament and motivations of the nations or rulers who rise up against God. And we can strive to be different, prayerfully keeping up with God’s word and with the progression of the world.

To give us hope!

Yes, several of the major Bible prophecies contain scary language. But if you read through to the end of the Bible, you’ll find that ultimately, all those beasts and dragons won’t even matter.

The best part of studying prophecy has to be the new perspective you get after reading the New Testament book of Revelation, specifically savoring chapters 21 and 22. These contain the “It’s all going to be okay!” passages of Scripture:

“Look! God’s dwelling place is now among the people, and He will dwell with them. They will be His people, and God Himself will be with them and be their God. He will wipe every tear from their eyes. There will be no more death or mourning or crying or pain, for the old order of things has passed away.” (Revelation 21:3-4, NIV)

“Look I am coming soon! My reward is with Me, and I will give to each person according to what they have done. … Blessed are those who wash their robes, that they may have the right to the tree of life and may go through the gates into the city.” (Revelation 22:12-14, NIV)

If we know how the story ends, and it ends well, what perspective does that give us for the more alarming prophecies we discover along the way?

Evil things may be happening throughout the world, but God will be triumphant over all.

Just knowing that can aid you in your studies! No matter what kind of odd depictions of the future (or the past or the present) you find in the Bible’s prophecies, you know justice will be served and God will save those who follow Him and want to live with Him forever.